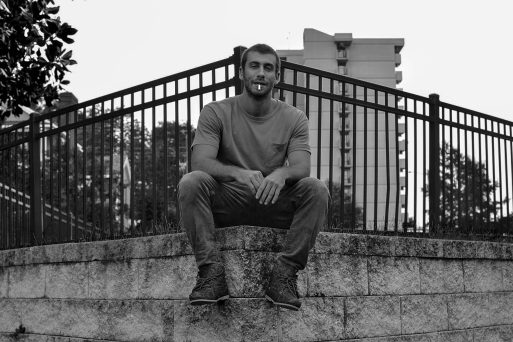 Give us your bio

My full name is Austin Capps (but you can just call me Capps). I’m from the small, South Charlotte town of Waxhaw, NC. My mother moved to Monroe, NC when I moved away and it’s a much rougher place than Waxhaw.

Three brothers who are my best friends. Grew up in the country and never was really exposed to hip-hop until I learned who Eminem was when I was around 12 or 13… And fell in love. Where I’m from if you try to be a rapper you’re kind of a joke, but I rapped all throughout high school cause fuck all that shit I wasn’t really good at anything else other than ball and being 5’11 and white.. hooping in the league wasn’t exactly in the cards. Moved to east North Carolina when I turned 18, now I live in Wilmington, NC.

Who are your top 5 influences

The little devil on my shoulder.

Eminem is huge for me. For obvious reasons but really he just doesn’t give a shit about what anyone says about him and really neither do I. He was the first rapper I really loved and was inspired by and forever will be.

J. Cole has to be a close second. You never hear any bullshit from Cole I love it. Plus he’s from NC. Cole is probably my favorite artist and biggest inspiration. Talent flows through his veins and he lives through his words it really is beautiful.

When are your new projects coming out?

My debut mixtape just dropped so go download that ishhhhh. Haha its called “The Moment of Truth” and it really has a song for everyone and I mean everyone. It has lots os different vibes to it. Some happy some sad, but it’s a fun tape, I’m just beginning to tell my story, or create it for that matter. No time table on when the next project will drop. But I’ll continue to make songs and hopefully drop a few every here and there.

What helped you get into music?

Listening to Em really opened me up to it but the first rhymes I ever wrote were actually poems. Some of them are on youtube too just look it up “Austin Capps poetry slam”. It really helped me express myself in a way nothing else every good. I’ve never really been one to open up to a lot of people or tell people what’s going on in my life and poetry really helped me do that, as does making music now. There’s nothing like it.

What is one thing you would tell your fans?

Download my shit!!! Haha just kidding I would just tell them that it means a lot that I can even make some sort of art that they can appreciate and I hope a song I may have made can relate to something going on in their life and maybe get them through a struggle their going thru because we all have them, in our own light.

What are your biggest goals for 2016?

To make the best music I possibly can and be the best man I can be to the people around me.