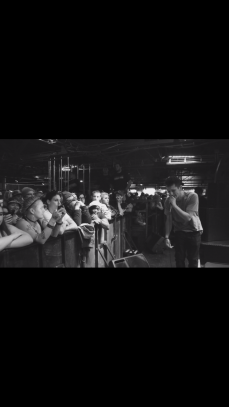 Conrad has great work ethic and an ear for dope production. His flow is unique and allows him to get his message across instantly. We can only watch Conrad move forward as his music gets more and more recognition. Love to Conrad for letting us get this interview!

bio-
Detroit Native, The hottest hip-hop artist on the white boy end doing it very well right now with his music, show’s, verses, artist too artist work and ect. is what I do, I consider myself a preforming-recording artist, song writer and producer.. His name is Connor MacLean but he goes by Conrad
He is 21 years old and sounds like no other hip hop artist you have ever listned to before.
Conrad‘s style brings great energy and is very unique.
Conrad has done shows with Heavy hitters like Machine Gun Kelly, Sammy Adams, Gorilla Zoe and Detroit Legends like Tone Tone.
Conrad has songs with two Detroit legends “Tone Tone and young roc” Conrad also has a single with Gorilla zoe!! Also great music with many more great artist on the way!!
Conrad is currently working on his debut mixtape “sleepless Knights” and debut Album “Addicted To This LIfe” with the super producer ICEPIC who is associated with Big Sean.
Conrad is also currently finishing his debut “EP” and “LP” with other producers from Detroit, which The EP is set to drop at the end of the summer also the LP is set to drop this fall following his mixtape!!
Conrad is dope! be on the lookout for him because he has been killing the rap game in Detroit for quite some time!!
top 5 influences
Conrad says his top 5 influences are
“when it comes to music that question is almost impossible but here you go”
says Conrad
1. Eminem of course
2.J.Cole
3. Logic
4. Joey Badass
5. KingLos
those are off the top of Conrad‘s head
when are your new projects coming out?
As said in Conrad‘s bio
he is working on 4 PROJECTS RIGHT NOW!! Conrad HAS — “EP” and “LP” which The EP is set to drop at the end of the summer also the LP is set to drop this fall following his mixtape DROPPING IN THE WINTER!!
the his ALBUM “ADDICTED TO THIS LIFE IS DROPPING JANAURY 2017..all debut projects. with music videos dropping in between them
what helped you get into music?
what helped Conrad get into music was first off getting inspired by other artists that Conrad looked up to growing up, going into high school his friends and peers would like to freestyle in the hallways when Conrad was in 9th grade and Conrad would always blow people’s minds so one dayConrad was freestyle rapping outside of a pawn shop in Detroit and This older Man heard him rapping. Conrad‘s lyrics as he was walking out of the pawn shop caught this Man’s attention and the older man  invited Conrad to his studio, the rest is history!
“mostly what helped me get into music was my first few times recording, After my first few sessions it had felt like I lost my virginity all over again and all the stress was taken off my mind”
-says Conrad
1 thing I would tell my fans is
KEEP BELEIVING.. to my fans that Believe in me now I promise you when I sign my first major deal you will get credited for being a fan and believing me on my come up! I love my fans
biggest goals for 2016
get some features from some of your favorite artists, get featured on a def jam artists mixtape “which is in the works” drop my debut’s “LP,EP Mixtape’ and 4 dope debut music videos in between, omtop of doing shows, and features leading me to making some more money to end off 2016 and be ready to go on tour in 2017!
twitter @conradMAC_LEAN
insta @kill_conrador_die
https://soundcloud.com/conrad313/player-shit-produced-by-icepic