When we talk about innovation, creativity, and a fundamental understanding of the game, this kid is way ahead of time. We deal with rappers all the time, in fact, probably everyday… However, we don’t deal with GREAT rappers all the time. This young man is a true emcee who is alive to put his mark on the game. Everything from his flow to his production is on point. I can’t wait to see what this artist has next for us. Show some love!! – Team

My top five influences… Man kinda hard. #1 would have to be Nas. I remember being 12-13 and playing an old grand theft auto on my PlayStation, and hearing NY State of mind come on the radio thing. I dropped my controller and was stunned by what I heard. I was always into story telling type stuff and poetry, but that combined with the hip hop instrumentation really hit something to me.

Another great influence to me would be from the BlackStar album.. Came across that shorty after my Nas discovery. The lyrics and especially the song Thieves in the Night made me have that exact same feeling that the Nas song did.

Rage against the machine was another good one. I loved their whole atheistic of being somewhat rebellious and not being afraid of authority, also not having fear in self expression or standing up for beliefs

My names Matt, I’m currently 21 I come from Peoria Illinois, about 2 hours south of Chicago. A lot of people think it’s a burb of the chi but it’s not. It’s a cool town sometimes ya know, I’m definitely not in love with it but I’ll always have the hometown love for it. There are a few artists like me who have similar goals and I think really have what it takes to put our city on the map and really blow people’s minds with this music. I grew up in an extremely dysfunctional household. My father being an alcoholic since I was a child, him being abusive at times, him going to jail for his actions leaving my family pretty much destroyed amongst a lot of other chaos. I didn’t see him for 2 years when I was a teen just getting into high school. And see when I was a kid, my mom didn’t like hip hop. Her and my dad both hated it and would always tell me I shouldn’t listen to “this shit”. Of course I didn’t listen because our opinions were so different, but as I grew and started to take it more serious, I knew I wouldn’t get much support from them. But that didn’t stop me then, and it sure isn’t now. Hip hop is what kept me above water in my dark times of being a kid. When I was 16 I started writing spoken word, which I found out from being in my local hardcore/punk scene. (My dad actually raised me on classic rock, which eventually got me into punk later on). I eventually branched out when I listened to more hip hop, it made me really wanna try it out and see if I could develop some skill with it

So by the time I was 17, I knew it was more than just a hobby. I took it seriously because of the way it made me feel, and how good of an escape from real life it was for me.

A few homies and I wrote a really bad song all about Harry Potter in his room with a tube sock over a usb mic that was dangled over his ceiling fan. And that was the first verse I ever recorded. Comical but absolutely terrible.

2016 I want to get my album out and do a small Midwestern tour. Networking for a while helped me meet some dope people across the Midwest that are great individuals, that have made connects with other artists here, that help each other get shows and what not, I’ve never seen anything like it. It’s really awesome.

One thing I would tell my fans that more often than not.. Trusting your gut rather than listening to outside opinions will do you good. I can promise you. Took me a long time to learn but I’m glad it’s in my head for good now. 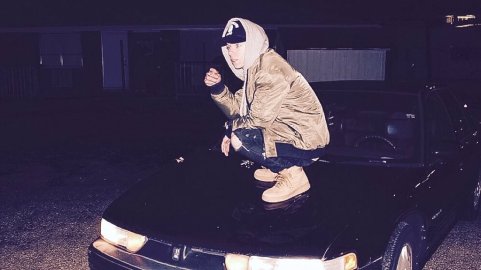 I’ll be dropping a tape before rich forever comes out, it will come out pretty randomly, just keep watch on my social medias. I’m working on it as we speak, and rich forever at the same time. I think it would be cool to surprise people with it, like boom..here’s a dope free project for you guys

Also, a little shout out to @___HELLION , @myleswav and @DylDiggler as they will be providing production on my releases in the near future